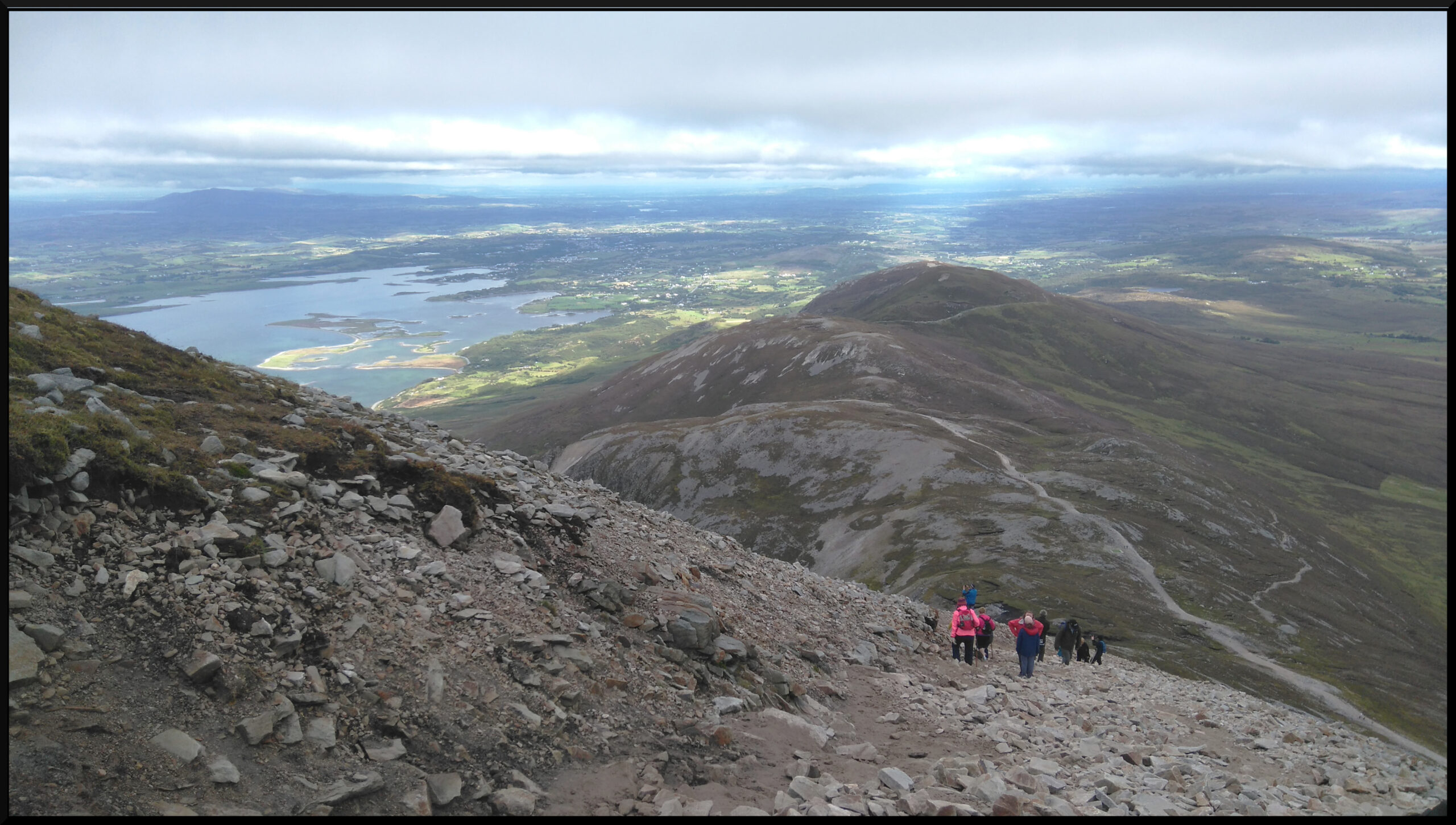 This is my first post on this blog and what better way to start it than with one of my first climbs on one of Ireland’s most well known mountains – St. Patrick’s holy mountain, Croagh Patrick in Co. Mayo.

What aspiring hill walker hasn’t wanted to climb ‘The Reek’ at some point in their life? I had heard people talking about it, saying it was a difficult climb and they wouldn’t do it again. But I had seen others who climbed it year after year and some in their bare feet. At 764 metres high, I had no desire to climb it barefoot, but I did want to challenge myself to climb to the top.

Maybe it wasn’t so much of a climb, but it was a hard slog all the same, especially for a newbie hillwalker. I travelled down to Mayo in the early hours of the morning in August 2015 with a local walking group and, as the bus pulled into the car park at the visitor centre, the sun was shining and we were anxious to get climbing.

The first part of the walk wasn’t too bad. About half way up the mountain the surface levelled out for a while and we stopped for a chat before we started for the second half of the climb. This time we had to pick our way over loose stones that sent us sliding one step back for every two or three we took. We soon learnt there was a knack to the footing and we walked to the sides of the stones where we could.

We stopped and stood in silence for a while when we noticed rocks and stones below that had been moved to form words around a small body of water – a tribute to a group of Irish students that had tragically died in a balcony collapse in Berkeley, California some weeks before.

Then we moved on, stopping every so often to rest, until at last the summit came into view. Unfortunately the weather began to deteriorate as we reached the top, and a heavy mist descended on us.

Over at the infamous Croagh Patrick sign post, two men who had walked up the mountain in their bare feet for charity were having their photo taken.

We sat down and had a bite to eat at the side of the small chapel on the summit until it was our turn for photographs. Unfortunately, in my efforts to keep warm, I completely forgot to take a photo of the outside of the chapel, although I did take one of the inside while mass was being said. The only other time I climbed the top of Croagh Patrick (about two years later), the church was closed.

It was too cold to hang about at the top of the mountain, so we began our descent, picking our way down across the stones again. The mist fell and rose, and at some stage it cleared enough that I was able to see some of the islands scattered around Clew Bay. Legend has it that there are 365 of these islands but I wasn’t waiting around long enough to count them.

We eventually reached the visitor car park and one of the women produced a box of cakes and bakes which we had no problem devouring.

The buns and cakes were washed down with beverages from the local bar (The Tavern) before we clambered aboard the bus again for home.

We stopped for a lovely dinner in the Maldron Hotel in Oranmore – a hotel I’d stayed in the year before and where I’d enjoyed a lovely, relaxing couple of days.

Is there a better way to end a trip than with a nice coffee and a decent slice of delicious cheesecake? Our hunger sated, it was back onto the bus for the trip home. And, what a memorable trip it was, for I’m sure our driver was of the opinion that, if he didn’t make it home before midnight, the bus would turn into a pumpkin. Thankfully we were home in plenty of time and our mode of transport remained intact.